I took a look at electricity data recently from California and Hawaii and I saw a duck that was learning to fly.

Well, what I saw was that the so-called Duck Curve–the load shape some grid operators expect to contend with as increasing levels of wind and solar resources create ramping challenges for conventional generation–is evolving slower over time in these two states.

Some contend that peak demand will continue to grow as mid-day net-load drops, making an ever-steeper ramping need—hence the Duck Curve. But Hawaii and California are casting doubt on this premise. We highlight many ways to address this challenge in our publication Teaching the Duck to Fly. And some of these things are happening now.

For a reminder, here’s the classic California Independent System Operator (CAISO) duck curve. It forecasts that peak demand will grow about 10 percent between 2012 and 2020. A recent blog post from the Energy Center at Haas uses some real data from CAISO. The data is not perfect (it is not weather-adjusted, and there’s a small problem with losses) but it’s close enough to be instructive.

What it shows is that peak has actually been dropping over the last few years, not rising. The March peak in 2016, was down about 5 percent relative to 2013. As California rolls out time-of-use (TOU) rates, I expect that commercial and residential customers will find they can forego many energy-intensive activities such as laundry or baking during weekday evening high price times, causing the peak to drop even more. [I don’t want to be too optimistic—a warming planet can possibly overwhelm improving cooling efficiency.] Evaluation work from the Sacramento Municipal Utility District’s pricing pilot shows that more than 80 percent of customers took discrete actions to reduce loads during high cost periods, including turning off lights and electronics, deferring laundry and dishwashing, and adjusting thermostats.

Here’s the graphic of actual loads (note that the vertical axis does not start at zero, which accentuates the perception of a steep afternoon rise in usage). 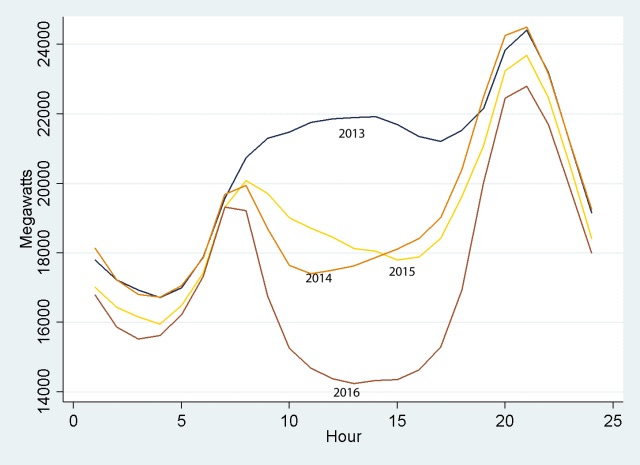 The lack of weather adjustment leaves me hesitant to declare this to be dispositive—but there is no obvious increase in peak demand over this analysis period. This is no surprise—energy efficiency programs, building code improvements, and demand response efforts have continued in California. In addition, California rate designs for commercial and industrial customers provide a strong incentive to manage afternoon demand, and the inclining block rate design for residential customers provides a strong incentive to manage “tailblock” demand—usage above 130 percent of the customer average monthly usage—which is dominated by air conditioning loads (an afternoon-peaking load).

Even More Dramatic in the Aloha State

In Hawaii (where there has been some other big news recently in the form of the HECO-NextEra merger denial), solar penetration has reached 16 percent of customers. That’s more than a third of owner-occupied single-family homes—the customers with roofs they control and access to credit. The same trend we saw in California is happening in Hawaii, and the results are no less than stunning. The decline in total utility loads is due to a combination of solar, energy efficiency, and price response. It’s certainly difficult to separate the three causes, and I won’t try.

The graphic below is taken from the Hawaiian Electric Company (HECO) Power Supply Improvement Plan, submitted to the Hawaii Public Utilities Commission in 2015. It is VERY interesting. This argues for “grandfathering” solar early adopters at a more generous compensation scheme than post-2014 solar customers. Clearly, they have provided both capacity benefits for the electric system and reduced petroleum consumption, while actually making it easier for the utility to follow load through the day. No “quacking” is audible in the data through 2014. And the Hawaii PUC has done exactly that—preserved net metering for existing customers, and adopted a different and lower compensation framework for new solar customers.

The bottom line of the changing load shape is that the duck curve is evolving much slower than previously assumed. The reduction in total peak demand, and the more gradual ramping requirement both make system planning and operation easier, and reduce costs.

But wait—there’s more! Customer bills in Hawaii are going down, too!

In Hawaii, energy efficiency and renewable energy are bending the load curve, and also significantly reducing demand, driving bills down. Even despite increased per kWh rates, customer bills are lower because of the significant reduction in demand.

Hawaii has a decoupling mechanism to make the utility whole for any decline in sales. Every year, there is a rate adjustment from the Revenue Balancing Account (RBA) for sales and from the Revenue Adjustment Mechanism (RAM) for changes in system costs due to improvements, including improvements to adapt to higher levels of variable renewables. Since decoupling began, overall cumulative decoupling surcharge increases have been between 4 and 7 percent. If usage had remained the same, bills would have increased. But usage has declined sharply and the bills are lower.

The data below is for the residential class from the 2016 decoupling filing in Hawaii, where the Hawaiian Electric Company (HECO on Oahu, HELCO on the Big Island, and MECO in Maui County) seeks recovery of distribution margins lost as a result of lower sales (from any cause).

First, the overall rate impacts in this year’s filing are pretty trivial—0.0 percent, 0.2 percent, and 0.54 percent (increases due to lower sales made smaller by prior-year reconciliation adjustments, and totally dwarfed by reduced fuel costs in any event, and those are not shown here). I used average revenue/kWh from 2011 as a baseline against which to measure the cumulative impact of decoupling. The cumulative impact over the five-year periods are more significant.

If we divide the total amount of the RBA (cumulative since 2010 for HELCO, 2011 for HECO, and 2012 for MECO), it’s a 4 to 7 percent total increase across the history of decoupling. Add to that the energy efficiency surcharge, and you have total RATE increases of 5 to 9 percent. But, importantly, this is offset by usage per customer declines that are at least twice as large. Small rate increases are more than offset by large usage decreases.

This does not mean that every customer is seeing lower bills. Those who have not installed solar and have not acquired energy efficiency measures are seeing higher bills if their usage has not declined. This includes many renters, who generally cannot make long-term improvements in their properties. This is one reason it’s important for energy efficiency programs to reach every customer.

But, wow! “Flat load growth???” Not when you actively deploy energy efficiency and renewables.

If we look at it on a kWh/customer basis, it gives us a basis to compare because we take customer growth and changes in sales into account. The three utilities kWh/customer is down 22.6, 15.1, and 11.2 percent. In every case, the decline in use per customer is more than two times the increase in the per-kWh rate. That pace will likely not continue, because Hawaii has dramatically restricted additional residential solar hookups. But it’s dramatic.

And, on top of that, the 2014 collapse in oil prices has led to significant reductions in rates through the fuel adjustment mechanism. That benefits all customers, not just those who participate in energy efficiency and renewable energy programs. But fuel prices could go back up—except that Hawaii is moving towards 100 percent renewables, and will dramatically decrease its dependence on fuel to produce power over the next couple of decades.

There are some caveats, here. For instance, this is not the whole picture in terms of energy cost. The customers installing solar systems had to pay for their solar systems themselves, albeit with generous 30 percent federal and 35 percent state tax credits. And customers participating in programmatic energy efficiency had to pay for about half of the cost of the efficiency measures partly funded by Hawaii Energy, the statewide energy efficiency utility. And it is important to note that only 16 percent of customers are getting bill reductions from renewable energy investments, and only some (large) fraction of customers are getting bill reductions from energy efficiency.

Furthermore, some customers are paying the decoupling and energy efficiency surcharges, but not directly benefitting from either program. However, even these customers benefit in the long run from lower loads, lower peak demands, and lower needs for new generation, transmission, and distribution investments. The challenge, at least with the energy efficiency programs, is to achieve close to 100 percent participation. That spreads the benefits to all customers.

Energy efficiency has lowered demand in all hours, with a concentration during the peak hours (which is more important as those peak hours shift later in the day when solar cannot serve these loads).

So we cannot assert this to be a NET energy cost savings for all customers. It is not the whole picture. But it is interesting, and it may offer lessons for other parts of the country interested in cleaner energy, lower bills, and a reliable grid. Certainly, the duck is taking off in Hawaii and California. Why shouldn’t it soar elsewhere too?

The bottom line: The combination of energy efficiency and renewable energy investments is resulting in lower total sales of electricity (and the associated emissions), lower peak demands (helping to alleviate future cost increases), and lower bills for electric consumers.

The duck is learning to fly in both California and Hawaii.

A version of this post originally appeared in Utility Dive.