The European Commission’s recently released Clean Energy Package, has a 2030 target of 30 percent energy savings. An important policy instrument to deliver these are Energy Efficiency Obligation (EEO) schemes. According to new RAP research, not only are EEOs a highly cost-effective way to deliver energy efficiency, but over the long term they can deliver consumer savings worth more than 4 times the costs of meeting the EEOs. But this only becomes apparent when a full evaluation is made. Most impact assessments carried out in Europe fail to take the full picture into account, thereby sending misleading messages.

2017 will be a big year for European energy policy, as the legislative proposals in the European Commission’s recently released ‘Winter Package’ are negotiated in the European Council and Parliament and shape the policy framework post-2020. Included in the package is the review of the Energy Efficiency Directive (EED) (2012/27/EU), which was introduced in 2012 to deliver a cut of 20 percent of energy consumption by 2020.

The Winter Package now proposes a 30 percent energy savings target by 2030, instead of the 27 percent initially discussed. Key to meeting this target will be the effective use of policy instruments: according to a report commissioned by the European Commission’s Directorate-General for Energy, released in May 2016, EEOs are expected to deliver 34 percent of all energy savings to 2020. This even though only 3 percent of all adopted policy measures across the EU Member States are EEOs. This makes EEOs the most important instrument in terms of energy savings.

All five EEOs analysed clearly show that the cost of “negawatt” hours is much lower than of megawatt hours.

EEOs are set out in Article 7 of the EED, which stipulates that Member States must require energy companies to save 1.5 percent of their energy sales per year through energy efficiency measures delivered. Alternatively, they can deliver savings through other policy measures, as long as they meet the same target. There are now 16 countries in Europe that have implemented or are planning to establish EEO schemes.

The Regulatory Assistance Project (RAP) has been closely advising the European Commission and helping Member States to implement EEOs with our Toolkit for Energy Efficiency Obligations. In a new report, Costs and Benefits of Energy Efficiency Obligation Schemes, based on research on EEOs in five Member States, we conclude that EEOs are delivering value for money in terms of energy savings, but that evaluation methodologies are not yet accounting for the full range of benefits that come with improved efficiency.

The Cost of Efficiency

The figure below shows the cost of EEOs to the public in Eurocent/kWh and compares those costs to the typical cost of supplied energy. All five EEOs analysed clearly show that the cost of “negawatt” hours is much lower than of megawatt hours. In other words, it is much cheaper to save one unit of energy than it is to supply one unit of energy.

Data for alternative energy efficiency measures such as loans, tax rebates, and grants shows that the costs of those measures are similar, although somewhat higher. On average, saving 1 kWh through those measures has a public cost of 1.4 Eurocent/kWh, compared to the range of approximately 0.4 to 1.1 Eurocent per kWh of energy saved through the EEOs reviewed in this study.

As well as delivering efficiency at low cost, there is now good evidence that EEOs have contributed to significant reductions in energy consumption. For example, the UK has delivered a series of energy efficiency schemes beginning in 1994, and as such, is one of the longest existing EEO in Europe.

Total household energy use in the UK decreased by 19 percent between 2000 and 2014, despite a 12 percent increase in the number of households and a 9.7 percent increase in population. The Centre for Economics and Business Research estimates that energy efficiency measures provided the greatest contribution to the reduction in gas consumption. As the majority of these measures were subsidised by the supplier obligations, it appears likely that the latter were the primary driver of energy savings over this period. Further analysis by Odyssee-MURE, a pan-European research project, confirms that EEOs are the most important factor in delivering energy efficiency in the UK.

System benefits include avoided or deferred investments in generation, transmission, and distribution capacity. They also include reduced reserve requirements and avoided CO2 permit costs for power generating facilities that are within a carbon tax or cap-and-trade regime. Analysis of data from Vermont shows that the energy system benefits on their own can justify aggressive investment through EEOs—the levelized costs of the EEO to consumers are $39/MWh compared to more than $100/MWh of energy system benefits.In evaluating the impact of EEOs and other energy efficiency measures, there is an emerging body of evidence on the benefits to the energy system as a whole.

The societal, or non-energy, benefits delivered by EEOs and other energy efficiency measures are substantial.

Our research found that these net-benefits to bill payers can be modelled over time. Initially the total energy bill will increase due to the cost of EEOs and higher unit prices. However, over time consumers’ bills are reduced resulting from the energy savings, generating net-benefits after a few years.

For a fictitious case this effect is illustrated in the graph below. The data are based on typical characteristics of EEOs in Europe, and therefore are a realistic reflection of the cost savings to expect over time. After five years, the modelled EEOs generate net-benefits as indicated in the graph. Over 20 years, the benefits exceed the cost by more than a factor of 4.

Assuming a succession of EEOs over 30 years, the long-term benefits are significant with total bill savings of close to 4,000 Euro over the 30-year period and a reduction of the average annual energy bill of 17 percent. 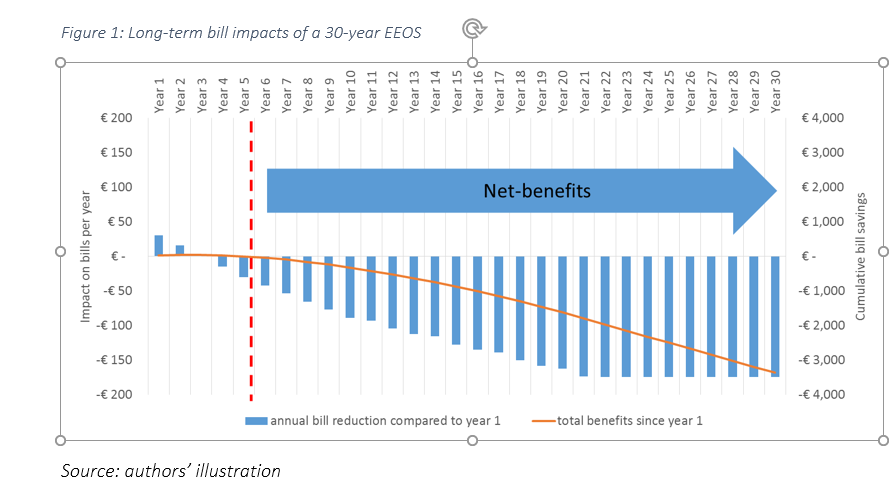 Additionally, the societal, or non-energy, benefits delivered by EEOs and other energy efficiency measures are substantial. In 2011, the International Energy Agency began its work on identifying and evaluating the non-energy benefits of energy efficiency, which include better health through reduced pollution, increased comfort, economic stimulus, employment creation, cost savings in transmission and distribution, avoided CO2 allowance costs, and air quality improvements. Data from the UK suggests that the non-energy benefits alone (including health, comfort, air quality, and carbon mitigation) exceed €4 for every €1 spent through the EEO.

Despite this diversity of benefits, most evaluations that are currently carried out in Europe focus on one benefit only—bill savings. A more comprehensive analysis would need to incorporate and monetise a much wider suite of benefits.

In particular, the methods for carrying out impact assessments and evaluations of EEOs (and other efficiency policies) need to be adjusted to allow for accounting for the multiple benefits of energy efficiency both at the EU and national level. The current practice of largely ignoring those multiple benefits in cost-benefit analyses underestimates the true value of efficiency and sends potentially misleading messages.

This requires changes in the guidance on conducting impact assessments and an explicit consideration of all multiple benefits rather than just a selected few. EU policymakers need to use a methodology that allows broad-brush assessments of the multiple benefits of energy efficiency by, for example, estimating typical benefits for each kWh saved.

The current practice of largely ignoring those multiple benefits in cost-benefit analyses underestimates the true value of efficiency and sends potentially misleading messages.

At a national level, Member States can modify their methodologies for conducting policy assessments and evaluations to better reflect the full range of benefits beyond the mere bill savings. Where data collection is burdensome and complex, the use of rough estimates (e.g., jobs created per million euros invested in energy efficiency) and/or adders (e.g., five-percent increase of the benefits to account for health improvements) is a simple option to include multiple benefits.

Our research evidences what international experience has demonstrated for a long time: if designed properly, EEOs are an effective policy mechanism and can deliver large energy savings and multiple benefits at low cost. EU Member States need to act through improving their existing and implementing additional EEOs. They also need to systematically consider the multiple benefits of EEOs, and energy efficiency more generally, when making decisions about future policies. Ultimately, this will be one of the cornerstones of Europe’s much needed clean energy transition.

A version of this article originally appeared on Energy Post.